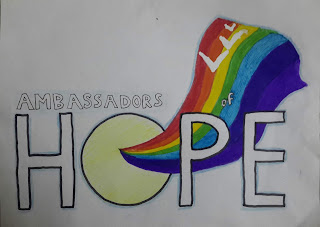 I have successfully completed the #BlogchatterA2Z challenge and now I can breathe a sigh of relief .

Writing blogs for one whole month encouraged me to write more and that is when I got to know about a campaign called #AmbassadorsOfHope.

This is a campaign started by the education minister of Punjab - Mr. Vijay Inder Singla. Any child of class 1 to class 12 studying in Punjab can participate in this campaign.

He / she has to record a video and post it on any social media platform. In the video he / she has to speak about the hopes that we have during these crucial times of Corona virus pandemic.

You can watch Mr. Vijay Inder Singla speaking about this campaign here :


This is a great initiative and I just love to see the videos of all the children and hear their viewpoint.
Now how could I miss this opportunity ????
So , go ahead and watch my #AmbassadorsOfHope video here : 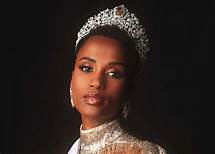 
Following her win, Tunzi received prizes including R1 million, a new car, and a fully furnished apartment. The achievement allowed Tunzi to represent South Africa at the Mi…
Post a Comment
Read more

Yousaf Malala- The youngest to receive the Nobel Prize #BlogchatterA2Z 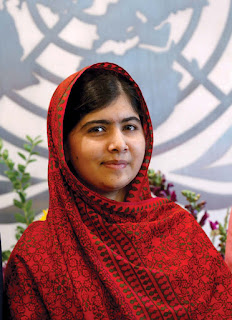 Malala Yousafzai was born on 12 July 1997 and is popularly known as Malala .

Yousafzai was born to a Pashtun family in Mingora, Pakistan.  In 2009, when she was 11–12, she wrote a blog for the BBC Urdu detailing her life during the Taliban occupation of Swat.

She is fluent in Pashto, Urdu and English and was educated mostly by her father, Ziauddin Yousafzai, who is a poet, school owner.

He is an educational activist himself, running a chain of private schools known as the Khushal Public School. Yousafzai started speaking about education rights in 2008, when her father took her to Peshawar to speak at the local press club.

"How dare the Taliban take away my basic right to education?" Yousafzai asked her audience in a speech covered by newspapers and television channels throughout the region. As Yousafzai became more recognised, the dangers facing her increased.

On Facebook, where she was an active user, she began to receive threats. In a meeting held in the summer of 2012, Tal…
Post a Comment
Read more 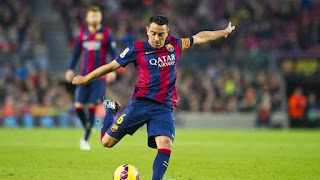 Xavier Hernández Creus was born on 25 January 1980. He is popular as Xavi (his nickname).
He is a former Spanish football player who is  currently the manager of Qatar Stars League ( a football club ) . and is highly regarded for his humble personality and team ethis . He is also considered by many to be the greatest Spanish player ever.


Xavi joined La Masia, the Barcelona youth academy, at age 11, and made his first-team debut against Mallorca in August 1998.
Xavi is the first player in the club's history to play 150 European and FIFA Club World Cup matches combined.
With Spain, Xavi won the FIFA World Youth Championship in 1999, and the Olympic silver medal at the 2000 Olympics and won many awards.
After the 2014 FIFA World Cup, Xavi announced his retirement from international football .


Talking about his early life , he was born in Terrassa (Barcelona).
Although he was initially inspired by compatriot playmaker Pep Guardiola at Barcelona, as a child Xavi also watched a lot of …
Post a Comment
Read more

W is for Waris Shah #BlogchatterA2Z 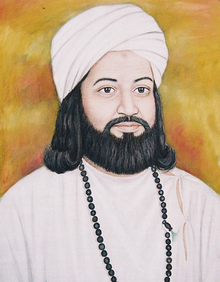 
His father's name was Gulsher Shah and mother's name was Kamal Banu.
Waris's parents are said to have died when he was young. Waris spent years in search of the perfect spiritual guide.
Waris Shah acknowledged himself to be a disciple of an ustad .
After completing his education, Waris moved to Malka Hans village .
There he resided in a small room, adjacent to a historic mosque now called Masjid Waris Shah, until his death.
Shah is famous as the author of Heer Ranjha.
Many verses of Waris Shah are widely used in Punjab in a moral context.
Waris Shah's life has been fictionalised in Punjabi-language films.
A 1964 Pakistani film was titled Waris Shah and was based on his life. 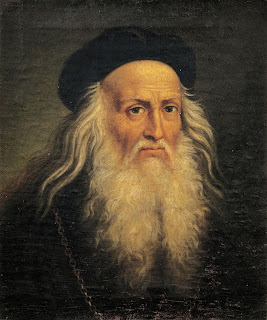 Leonardo was born in April 1452 in Florence and he was educated in the studio of a Florentine painter .


Leonardo spent his first years in the home of his mother, and from at least 1457 lived in the household of his father, grandparents and uncle in the small town of Vinci.
Leonardo received an informal education in Latin, geometry and mathematics.
In the mid-1460s, Leonardo's family moved to Florence, and around the age of 14, he became a garzone (studio boy) in the workshop of Verrocchio, who was the leading Florentine painter and sculptor of his time.
From there , he developed interest in art.
He later made many paintings including the world famous Mona Lisa.
The amazing fact about the Mona Lisa painting is the smie of the lady. It is so mysterious that no one can figure out its exact emotion .
It is said that this happens due to the shadows given at the corner of her lips.
Another interesting fact about the Mona Lisa is that wherever you stand , you will feel that the kady is…
2 comments
Read more

Udham Singh-The one who died for the motherland #BlogchatterA2Z 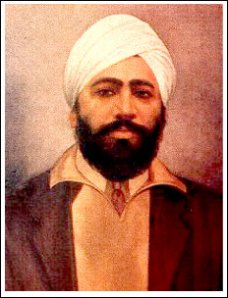 Shaheed Udham Singhwas a revolutionary belonging to the Ghadar Party.He is known for the assassination he did .

The assassination was in revenge for the Jallianwala Bagh massacre(1919) in Amritsar for which O'Dwyer was responsible.

His father died when Singh was very young . Then he and his brothers were adopted by an orphanage.

In 1919,  a number of local leaders of the Indian National Congress were arrested and the protestors against were fired by British troops.

Three days later ,  over twenty thousand unarmed people had gathered in the Jallianwala Bagh to protest against the act.

At that time, Udham Singh and his friends from the orphanage were serving water to the crowd.

Then happened the Jallianwala Bagh massacre for which O'dwyer was responsible. I think since then he had…
2 comments
Read more 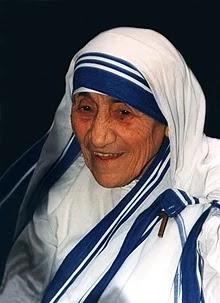 Born on 26 August 1910 and originally named Mary Teresa Bojaxhiu , She was the youngest child of her parents  .
Her father  died in 1919 when she was eight years old .Teresa was in her early years when she was fascinated by stories of the lives of missionaries .
By the  age  of 12, she was convinced that she should commit herself to religious life.

Teresa left home in 1928 at age 18 in the desire of becoming a missionary. After that she  never saw her mother or her sister again. She arrived in India in 1929and began her novice work in Darjeeling . Teresa took her first religious vows on 24 May 1931. She chose to be named after a french catholic nun Thérèse de Lisieux .
Teresa  served in a convent school  for nearly twenty years and was appointed its headmistress in 1944. Although she was teching but her mind was always disturbed by the sufferings of people she used to see around her .
She worked a lot for the poor and set an example of love and service to the humanity .
Teresa breathed her…
Post a Comment
Read more 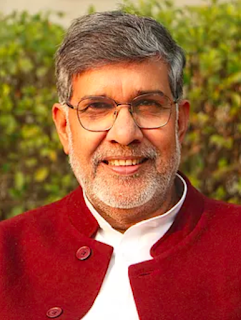 Today is Earth Day and I would like to share about a man who is trying to make our Earth a better place by saving the innocent Bachpan.

A child rights activist who is working very hard under his organisation Bachpan Bachao Andolan aka BBA  , received nobel peace prize in 2014 along with Pakistan's Malala Yousafzai .

His name is Kailash Satyarthi . Born in 1954 in MadhyaPradesh in India , this electrical engineer is working towards a great cause .

Satyarthi's  organisation BBA has rescued  tens of thousands of children from labour in industries and educated them too .

In 1998 , He organised a global march against child labour . In this campaign , more than 103 countries had taken part . He says his children keep him energized and drive him to keep working endlessly .


He is an inspiration for all of us . Salute to him !

Rakesh Sharma was born on 13 January 1949 in Patiala. He gratuated from the Nizam College (Hyderabad) and later joined the NDA(NAtional Defence Academy).


He was commissioned in the Indian Air Force as a pilot in 1970. In 1984 he was promoted as a squadron leader.

In 1982 , he was selected to become a cosmonaut and go into space as part of a joint programme between the Indian Air Force and the Soviet Interkosmos space programme.

Now you must be wondering that how is he the only Indian in space so far , after all Kalpana Chawla also went in space. Right ?

Kalpana Chawla was born in India but later she went to USA and was considered to be an American citizen......

He has been awarded the Ashok Chakra , the highest gallantry award in India and has made us proud.

A speech given by Rakesh Sharma: