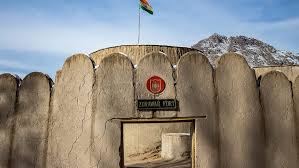 Zorawar Fort is a fort in Leh, Ladakh, India. It was built in 1836 for a military general,  Zorawar Singh Kahluria who was known for his struggle against the Chinese rulers over Ladakh. He was an expert in mountain warfare and all the credit goes to  Zorawar Singh that Ladakh became a part of India after its independence in 1947.  The fort once kept the wealth of the rulers of the Dogra dynasty .  There is a museum at the fort which currently preserves treasures of the rulers along with coins and postage stamps. The fort is made of a local type of grey clay, sun-dried bricks, stones and wooden frames. The fort may not be very impressive today because it was abandoned and neglected for a long time.  The Zorawar Fort was renovated for restoration in 2006. The fort has now been taken over by the Indian Army and it stands as a salute to the Ladakhi and Dogra warriors .   . With this , I officially announce that it's a wrap for Blogchatter 2022 !!  And for the last time I get to say  I
Post a Comment
Read more 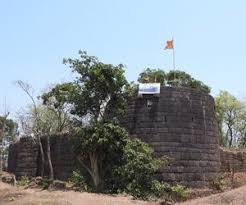 An island fortification off the coast of Maharashtra in Ratnagiri district , Yashwantgarh.   On three sides it was protected by a ditch which is no longer visible . On the fourth side there was a wall but at present , all the walls are in a ruined condition. A ship i.e. the HMS Outram sank here on 1 January 1817 . After this incident , a lighthouse at nearby Jaitapur was built. . . Not much to write about forts with these hard letters but anyway !  . I am participating in #BlogchatterA2Z 2022. Are you ?
Post a Comment
Read more 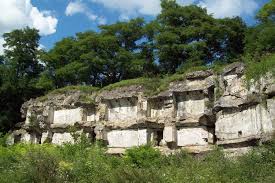 XIII San Rideau is an armored fort belonging to the outer ring of the Przemyśl Fortress.  The fort was built in the 1892-1896 which cost about 5 million crowns. It had the shape of a trapezoid with a base of 250 m and a width of 90 m surrounded by a dry , full-profile moat .  The barracks and combat building housed living quarters for the crew, ammunition and food warehouses, laboratories , toilets and kitchens. The walls and ceilings were made of concrete cast except some which were made of bricks .  The total area of ​​the fortress rooms was 2,200 m² During a siege , the fortress was surrendered. It was further damaged during the following siege . The fort kept getting demolished and its further deconstruction was stopped in 1968 when it was considered as a legally protected architectural monument . I am participating in #BlogchatterA2Z 2022. Are you ?
Post a Comment
Read more

Warangal Fort- From where the Koh-i-noor was taken#BlogchatterA2Z 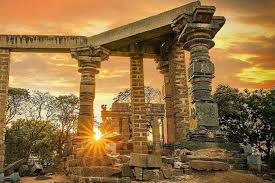 Warangal Fort is located in Warangal District, Telangana, India. The fort is included in the "tentative list" of UNESCO World Heritage Site.  Historians agree that an earlier brick-walled structure was replaced with stone by Ganapatideva and was completed by his daughter Rudrama Devi .  Twenty years later, the kingdom was conquered by the Delhi Sultanate.  In 1309, Malik Kafur, the general of Alauddin Khilji, attacked the fort with a large force and surrounded it. As the siege was unable to be lifted for more than six months, the ruler agreed to a truce with Kafur which included the Koh-i-Noor diamond along with various precious treasures, which he took it back to Delhi. The inner fortress was built of stone and surrounded by a moat that the Muslim soldiers swam across. When Kafur finally left the fort , he carried away the bounty on 2,000 camels !!  . . I am participating in #BlogchatterA2Z 2022. Are you ?
Post a Comment
Read more 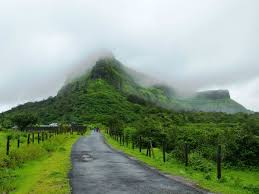 bethe 18th century by Balaji Vishwanath, the first Peshwa of Maratha Empire , stands the Visapur Fort in the Pune district of Maharashtra. It is located 1804 metres above the sea level and is on the same hill as the Lohagad Fort .   It was built many years after the Lohagad Fort was built but the histories of the two forts are closely linked. The British troops set up their cannons on Visapur and bombarded Lohagad, forcing the Marathas to flee.  As a result , the Lohagad-Visapur was taken over by the British in 1818 . Considering, the strategic importance of Visapur , gateways were blown up, and except a few huts, nothing was left standing.  Waterfall trek to the fort :  . . I am participating in #BlogchatterA2Z 2022. Are you ?
Post a Comment
Read more

During the Maurya empire , a fort was established at the foothills of Girnar hills but lost its importance lateron . The fort was rediscovered and a new foundation was laid of the monument we know today i.e. the Uparkot Fort .  Face visible at the Girnar hills According to a legend , a woodcutter cut his way through a forest and discovered a gate and some stone walls . A holy man sat nearby and the woodcutter asked him to tell him the name and history of the fort. To this , the holy man replied "Juna" .  The woodcutter made his way back home and reported his discovery. The ruler ordered the forest to be cleared which was when the fort came to sight. Apart from what the holy man had said , there was no information about the fort . So the fort was named 'Junagarh'.  The fort is home to the tomb of Nuri Shah , an artificially built square shaped lake known as Nawabi lake along with the Uparkot caves which are 2nd or 3rd century caves which were used by the Buddhist monk
3 comments
Read more 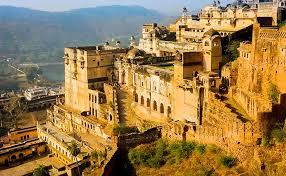 Constructed in the 8th century by Ajeypal Chauhan , the Taragarh Fort is a fortress built on a hillside of Ajmer in Rajasthan .  The fort was known for its strategic importance and was originally called the Ajaymeru Durg .  The Taragarh Fort is also home to a shrine dedicated to the Miran Saheb ki Dargah who lost his life in an attack by the Rajputs in 1202 AD .  One can also find a Criss cross sections of tunnels in the fort which were used as an escape route .  The Fort has three main gates namely , Phuta Darwaza , Lakshmi Pol , Gagudhi ki Pathak but all the three are in ruins today .  . . I am participating in #BlogchatterA2Z 2022. Are you ?
Post a Comment
Read more

Sindhudurg Fort , located on an island of the Arabian Sea , just off the coast of Maharashtra .  It was built by Chatrapati Shivaji Maharaj in the 17th century on an island named Khurte  . Construction was supervised by Hiroji Indulkar in 1664 .  Its main objective was to stop the influence of foreign merchants and to curb the rise of the Siddhis .  About 200 people were brought for constructing the fort and about 4000 pounds of lead were used in the casting . Till date , the fort remains a residence of some families. The number of permanent residents of the fort has seen a decline due to the unavailability of proper resources BUT some families still remain !  . . #BlogchatterA2Z 2022
Post a Comment
Read more 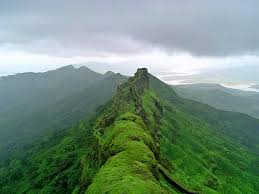 One of the most historical forts of the Sahyadris , the Rajmachi Fort .  Located in the Pune district of Maharashtra , the fort is home to two identical fortresses , Shriwardhan and Manaranjan .  The Rajmachi Fort was of great importance in the First Anglo - Maratha War and has been declared a protected monument.  The fort is located at an altitude of 2710 feet and it was originally built by the Satvahanas .  The site is very popular among trekkers and it appears more beautiful during the rainy season with streams , lush green forests and meadows .  . . I am participating in #BlogchatterA2Z 2022 . Are you ?
1 comment
Read more 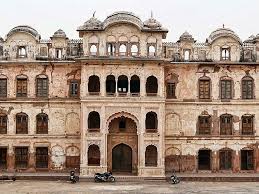 First built as Kachigarhi by Baba Ala Singh in 1763, A Sikh architecture fortress , Quila Mubarak .  Quila Mubarak in Patiala  It is located in Patiala , Punjab and was originally built of mud but was later reconstructed with bricks .  It was listed as one of the most endangered monuments in 2004 . Its restoration work has been started and the responsibility for the funding has been taken by the state and national governments .  At present , the Quila is the residential place of the Royal family of Patiala .  . Another Quila Mubarak stands in Bhatinda and it was here that Razia Sultan , the first woman to take on charge of Delhi's throne , was defeated , dethroned and imprisoned .  Quila Mubarak in Bhatinda  I am participating in #BlogchatterA2Z 2022 . Are you ?
2 comments
Read more 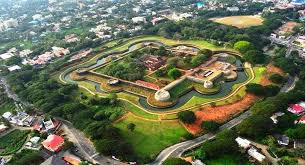 An 18th century military base, one of the best preserved forts in Kerala , the Palakkad Fort also referred to as the Tipu Sultan Fort.  The fort is said to be existing from a very large period of time but it was built in the present form in 1766 AD.  The fort was under the rule of the British or the Mysore Sultans upto about 1790 when it was captured by Hyder Ali.  The Palakkad Fort is surrounded by a moat . The fort also has an open air auditorium called Rappadi and a children's park called Vatika along with a stone step well .  The Palakkad Special Sub Jail is also located inside the fort .  . . I am participating in #BlogchatterA2Z . Are you ?
Post a Comment
Read more 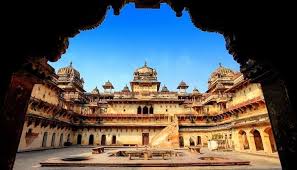 Built by King Rudra Pratap Singh of the Bundela Rajputs in the 16th century , stands the Orchha Fort in Madhya Pradesh , India .  It houses many monuments and various structures / edifices .  The fort complex is within an island which was formed by the Betwa and the Jamni river .  The exterior of the fort seems simple but on stepping inside , one can see the royal architecture .  Fun fact : A part of the fort was converted to a temple named the Rama Raja temple . And according to a legend , the temple was built when the queen , Rani Ganeshkuwari  was visited by Lord Rama asking her to get a temple built in his name !  .  . I am participating in #BlogchatterA2Z 2022 . Are you ?
1 comment
Read more
More posts

Suhani
Hi there ! Meet Suhani (Ahem ! Which is me) . As far as I know her , she is a 15 year old introvert who is not anti - social but selectively social . Other than school and studies , she likes to do something for herself which is some art including calligraphy and painting and Ha ! Blogging of course . She hopes that you don't find her blogs too boring ;)